Are You Ready For Solo Diving?

The issue of solo diving often comes up in conversation amongst divers and the activity is increasingly being seen as a more ‘mainstream’ pursuit, now supported through formalized training courses and qualification by most of the primary scuba training agencies.

As a technical diving instructor, I often get asked about what factors a diver should consider when evaluating their capability to conduct solo diving activities.  Here’s a list of the main issues that divers interested in solo diving should consider:

1.  Solo diving is an activity that should only occur once the diver is an accomplished buddy diver. It’s a refinement of skill, rather than an excuse not to possess skills.

2.  Appropriate training for solo diving should be obtained. Many agencies (including PADI) now offer solo diver training – and they tend to be exceptionally valuable courses. The PADI version is called ‘Self-Sufficient Diver‘ – in recognition that the training provided not only permits solo diving activities but also the development of self-sufficiency for any diver who may otherwise operate in a buddy pair or team.  Technical diving courses also tend to emphasize self-reliance as the primary means for incident resolution; with reliance on a buddy/team as the secondary, or final, course of action.

3.  Divers who engage in solo diving without appropriate qualification tend to fall into one of four categories;

4.  As mentioned, the mindset is critical. To conduct solo diving prudently, the diver needs to be confident that they have mitigated all reasonably foreseeable risks. That confidence needs to be based on a foundation of honest self-awareness (“how good am I really?“) and a comprehensive understanding of, and respect for, the risks they will face (“how prepared am I, when compared to the worst case scenario that I will face?“). Without experience and training, it’s hard to be honest with yourself that you fully understand the nature and consequence of the risks you might be facing.

5.  The prospective solo diver must have an honest belief, based on evidence of past performance, that they can handle emergencies calmly and with control. Panic is the critical factor and, if present, will nullify any hypothetical planning, skillset or emergency equipment carried by the diver. It’s hard for an inexperienced diver to have an honest appreciation of their performance under stress if they haven’t had the chance to experience stress and deal with incidents in the water. Role-playing/simulation in training can provide an insight into this, but there really is no substitute for ‘hard experience’. If a diver hasn’t had to deal with a given emergency situation, then they shouldn’t assume a capability to deal with that situation.

6.  Never fall prey to the ego-trap that tries to tell you that you are competent, just because you never experienced an emergency. Scuba diving is a safe activity and you won’t generally face critical problems on a regular basis. However, you are not necessarily a safe or competent diver because nothing goes wrong – you may simply be a lucky diver. Sooner or later, luck runs out. Doing X number of successful/uneventful dives should never be a criterion for deciding your complete competence under those conditions… or deciding your capability to progress into more demanding or higher-risk activities. Performance under ‘best case scenarios’ is not a determining factor in your ability to survive a ‘worst case scenario’.

7.  Solo diving places a critical importance on the issue of stress management. In a buddy team, there is always a ‘back-up’ brain – a person who may not be directly impacted/stressed by the emergency and, therefore, more likely react with calm and control to help provide a resolution. When diving alone, the stressed victim is also the person who has to resolve the problems affecting them. Never underestimate how stress/panic can degrade your ability to resolve a problem safely.

8.  Diving emergencies occur in-line with the principle of ‘Murphy’s Law’. It’s easy to rationalize that a particular risk is unlikely (and therefore dismissable) – but the random occurrence of such events is what causes diving fatalities. Nobody died on scuba that predicted, or expected, the incident that killed them. If you haven’t actively mitigated a risk, then you should dive in the assumption that that risk can become a reality, it can happen and it can kill you. Use those assumptions to guide you when setting your own personal limitations. In that respect, don’t be pre-occupied with the issue of depth – unless you possess gills, then having no access to air at 20cm is just as lethal as having no air at 20m.

9.  Diving emergencies typically feature a ‘chain’ of events. That is how scuba divers die under seemingly innocuous circumstances. Learn to recognize when you are on that chain… and be prepared to break the chain – if nothing else, by simply aborting the dive as a prudent measure.

10. Be aware of your capability to deal with multiple issues simultaneously – it’s easy to rationalize your capacity to deal with a single incident/stressor – but reality proves that such things rarely happen in singularity. A single incident/failure/stressor normally results in a ‘near-miss’… you survive. Multiple simultaneous incidents/failures/stressors have an exponential capacity for decreasing your chance of survival.

11.  Lack of skill, knowledge and capability drastically increase the risk of multiple simultaneous incidents/failures/stressors. This is the scenario where task-loading, stress and/or inappropriate response dealing with a primary issue can actually lead to the evolution of further subsequent issues. Be aware of how this ‘chain’ can work and ensure honest confidence in your ability to sever the chain through appropriate and timely response, with an emphasis on not creating further issues.

11.  Be pessimistic in your dive planning, risk assessment and risk mitigation measures. Never assume that you can simply ‘avoid’ a problem. Never assume that a problem will not arise. Be prepared, mentally, skillfully and with appropriate equipment, to deal with a problem. For instance; “Avoiding entanglements” is not a risk mitigation… “being prepared and equipped to deal with entanglements” is. 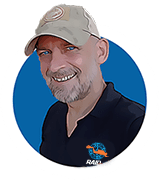