The FinnsSub Fly Side sidemount is a tear-drop shaped bladder based upon a DIR harness with metal backplate and buttplate rails.

The FinnSub BCD can be purchased with either an aluminum or steel (3mm or 6mm) backplate; or you can use an existing backplate/harness if you own already.  The purpose of including a metal backplate is to simply provide an alternative method of carrying necessary weight. 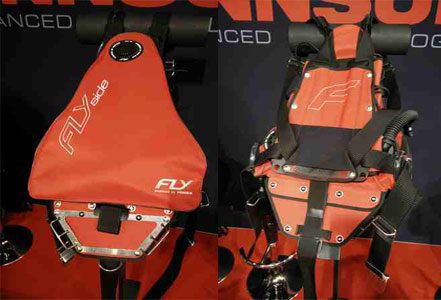 The Fly Side also includes trim weight pockets that can carry a total of 6kg.  It has a fitted buttplate with rails; and supports a range of bungee options. It retails for 590 Euros, including backplate.

The BCD provides 16kg/35lb of buoyancy, making it suitable for warm-water diving and some cold-water use supporting a drysuit.  The wing design is unremarkable and modeled closely on the triangle pattern first developed by UTD wth the Z-System, later replicated in the Aquamundo sidemount and Hollis SMS50.

The buttplate features ‘bent’ rails, which FinnSub claim will offer easier attachment/release of cylinder bolt-snaps.
The buttplate itself appears (from the photograph above) to be detachable, but there seems to be no alternative cylinder attachment option if it is removed. i.e.  no rear waist-belt where D-Rings can be placed.

The materials used in construction are durable and hard-wearing, but the system’s integrity may still be exposed by the vulnerable top-mounted, outer OPV. That location is the most prone to hard abrasion when passing tighter restrictions in caves and wrecks.

Whilst the FinnSub Fly Side is still undergoing testing and review, it has caused a mixed reaction amongst the online sidemount diving community.

The main question being asked is why FinnSub have seemingly reverted to using a solid/metal backplate as the intrinsic harness attachment.

Overhead Environment (cave/wreck) divers have cited the dangers of solid-backplates as a significant entrapment risk when passing tight restrictions; the dreaded ‘key-hole’ wedging.

There has also been criticism of the location of the top OPV, which overhead environment divers foresee will be subject to risk of extreme abrasion and other damage against ceilings/restrictions.

The ‘Fly Side’ seems to be a retrograde step in sidemount evolution.  I’m not sure whether to count it as a ‘pure’ sidemount BCD or as just backplate/wing adapter.

If considered a backmount adapter, then it is, perhaps, the most elegant solution on the market currently (albeit not using an existing wing, just the backplate).

The wing is ‘Mexican-style‘ in design; intended for use with aluminum cylinders; but the buttplate rail system will only work ideally with steel cylinders (Florida style). I’m confused whether it is intended for warm or cold water use. Most warm water destinations don’t use steel cylinders; the AL80 is ubiquitous.

However, as a stand-alone sidemount BCD, FinnSub seem to have dispensed with two of sidemount’s most intrinsic benefits; flexibility and freedom, in order to unimaginatively address mundane weighting considerations.

As a trimix technical wreck and advanced overhead sidemount instructor, I’d be very wary of attempting extreme restrictions in any sidemount BCD that contained a solid backplate. For that reason, I really don’t see that this rig has much place in sophisticated cave or wreck scenarios.

Another significant benefit to sidemount bcds is their lightness and low-bulk for travel.  The Fly Side also abandons that concept and requires divers to lug heavy backplates in their suitcases; along with corresponding excess baggage fees.

The top OPV/Pull-Dump is extremely exposed and, for me personally, would probably be catastrophically damaged on it’s first serious wreck penetration dive.  I’ve always believed that OPVs on sidemount BCDs need to be protected by placing them on the underside, or at least, on the sides.

I’ve destroyed plenty enough outside-located OPVs to be anything but skeptical about claims they can stand-up to the abuses of serious overhead environment restrictions passage.

The FinnSub in a nutshell

A Hollis SMS50 on steroids, built around a heavy backplate system that defeats many of the ‘pros’ of sidemount.

I’m just mystified why a company would make Mexican-cave style wing for aluminium tanks, then add a buttplate for steel cylinders, and finally the decision to compromise so many sidemount advantages by using a metal backplate. It’s an ill-considered design that doesn’t seem informed of how sidemount evolved.