I occasionally hear sidemount divers report having problems reaching the XDeep Stealth dump valve. There are some simple solutions to this problem, but those solutions aren’t what many divers intuitively realize by themselves.

Why is the XDeep Stealth dump valve located at the bottom of the wing?

The decision by XDeep to locate the Stealth dump valve at the bottom centre of the wing is actually very clever and the outcome of extensive diving experience. It solves a critical safety problem that many divers may not have experienced and, thus, don’t perceive as a risk.

Because the majority of wing buoyancy is located around the lower torso, an instance of positive buoyancy will try to pull the diver into a legs-upward orientation. XDeep located their dump valve in the optimal position to vent gas from the wing under those circumstances.

When dump valves are located in other positions, such as the side hips or up on the shoulders, the diver has to manoeuvre their orientation horizontally and/or vertically against the effects of their wing buoyancy to get their dump valve into the highest position relative to their wing.

For routine buoyancy control, that small act of manoeuvring is inconsequential and barely noticed once it becomes habitual.

However, the need to manoeuvre oneself positionally becomes far more problematic when faced with emergencies like a rapid uncontrolled ascent or if the low-pressure inflator gets stuck open.

That additional time needed to manoeuvre before dumping, even if just a few seconds, is amplifying the severity of the emergency. The diver’s ascent rate is accelerating and the gas volume within their wing is expanding rapidly. As the gas volume inside the wing increases, so does the amount of physical exertion necessary to manoeuvre oneself against the buoyancy forces it creates.

The XDeep Stealth dump valve is located for emergencies

Uncontrolled ascents and LPI failures demand quick resolution. The location of the XDeep Stealth dump valve facilitates a quicker resolution by putting the valve exactly where it needs to be.

Personally, I admire diving equipment manufacturers who focus their design on maximising diver safety, rather than appealing to consumer compulsion towards convenience, familiarity and superficial functionality.

In 99% of cases, this is a skills and equipment configuration problem, not an equipment design issue. Problems are most routinely encountered by novice sidemount divers and those switching over from rigs that locate the dump valve in a very different position; especially over-the-shoulder dump valves still used in some Florida-style sidemount systems.

First and foremost, weak fundamental skills can be to blame for problems reaching the XDeep Stealth dump valve.

In particular, horizontal trim plays an important role. If you’re not holding proper trim, with shoulders, hips and knees in flat alignment, then you will experience difficulty reaching backwards to access the dump valve and your sidemount pouch at the rear.

Allowing your body to bend at the hips, with your knees dropping, works against your shoulder’s range of movement as your reach behind.

You can experience that right now; simply stand erect with a straight spine and reach back to touch your coccyx. Then bend forward at the hips. You will feel increased shoulder strain and extension necessary to keep your hand in that position.

It can be beguiling to want to believe that a problem must originate from someone else’s mistake. For instance, “the XDeep Stealth dump valve is badly positioned“; blame is attributed to the equipment designers. That precludes thinking about whether the perceived problem has a more personal cause. When problem-solving your diving equipment and protocols always start with an honest assessment of yourself.

Quick fixes have a powerful appeal. Our brains are evolutionarily wired to prefer the convenience and quick-easy judgements.

It is far more attractive to believe that a problem can be resolved in 30 minutes with some equipment tinkering and a little modification. The alternatives; spending hours comprehensively re-configuring your equipment system, or days working to remediate skill deficits, can be very unattractive.

Those two issues can lead divers into pursuing quick-fix equipment solutions that avoid or deny the underlying problems. At best, those solutions provide an awkward workaround for the issue. At worst, they create a spiral of issues where each solution creates further problems.

Fall into that spiral and your equipment configuration will inexorably degrade from bad to worse.

Of course, there may be a few legitimate reasons why the solutions listed above might be a diver’s best available solution. What’s important is that they’ve actually done an honest evaluation of their problem or needs, and chosen a justifiably optimal solution, not just a convenient one.

My comprehensive guide to sidemount configuration and development as a diver.

There are six common equipment-related issues that impede access to the XDeep Stealth dump valve. I frequently observe sidemount divers having one, or more, of these issues:

It is feasible that a diver could just have disproportionately short arms or very impaired shoulder mobility. As a rule of thumb, if you can reach behind and touch your coccyx then you can reach the XDeep Stealth rear dump.

In over a decade of exclusively teaching sidemount full-time to hundreds of students, I’ve only ever encountered one diver who had legitimate physiological problems reaching the XDeep Stealth dump valve.

In that single instance, we had to modify and extend the diver’s dump valve toggle cord; routing it further to the right-hand side of their wing.

These sorts of modifications are an absolute last resort. They are only implemented when every other potential factor has been ruled out. 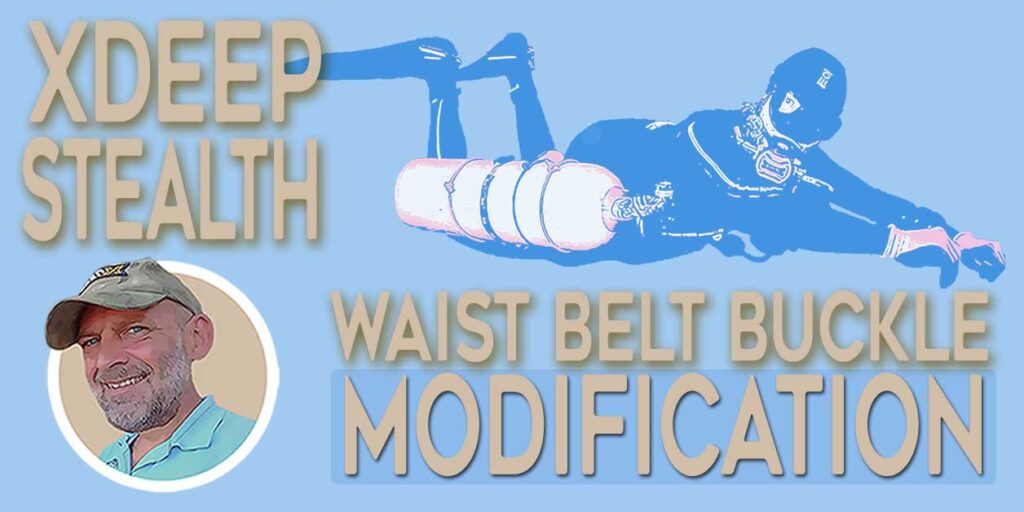 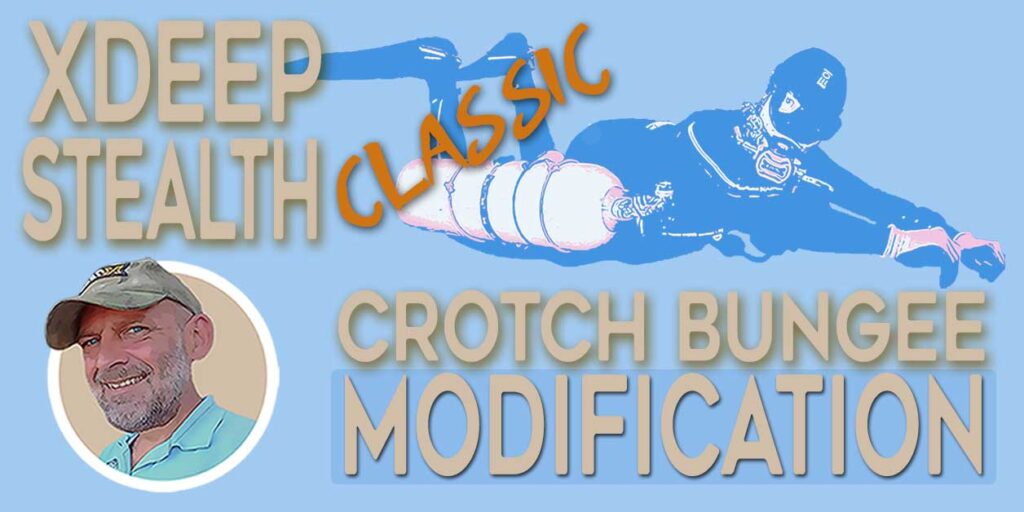 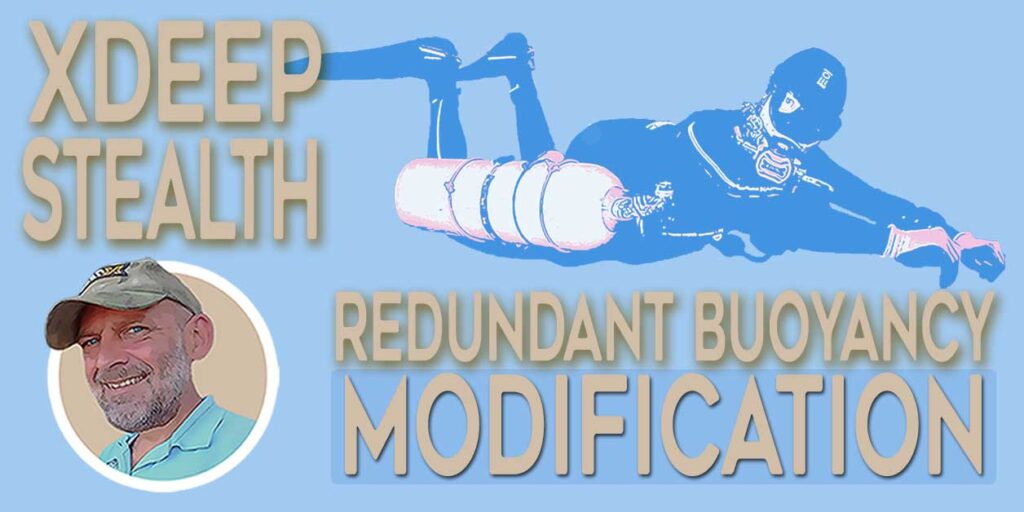 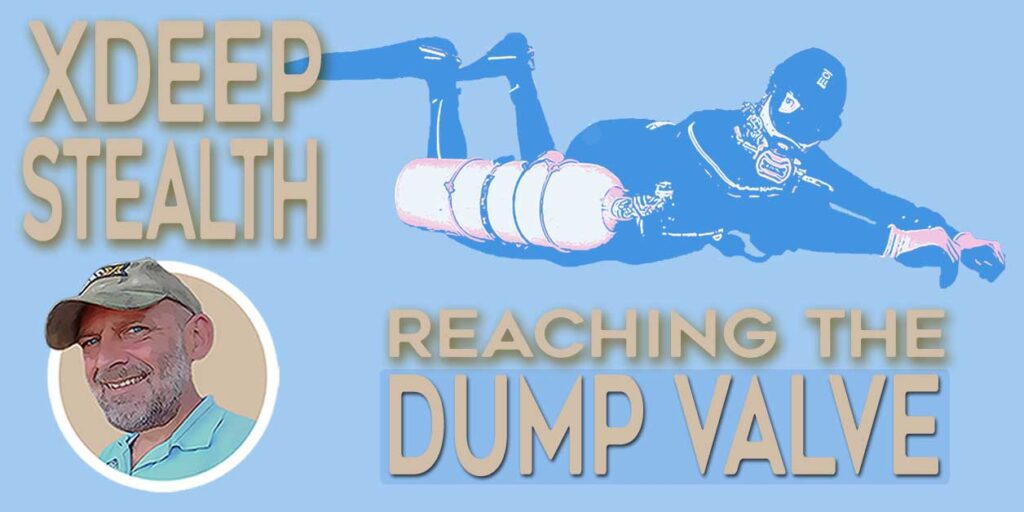